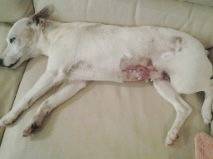 TESSIE a 1 year old foxie x was dumped in Kyogle and taken to the pound, no-one came to claim her and her time was up when the pound called ARRG to take her. When she arrived at the centre we found she had a large hernia on her stomach, probably the reason she was dumped. So Tessie was taken to the vet for her basic vet work and also for the hernia to be operated on.

The operation was successful and Tessie went into foster care until she recovered and then we found the best home ever for her for life.

Monty dumped in severe pain aged 3 mths
Monty a collie x puppy was dumped at 3 months of age by heartless people and was taken to the pound who called ARRG for help. He was severely neglected and had one of the worse skin conditions we have seen and this little puppy was in severe pain with red and hot swollen limbs. More info »

**A MASSIVE THANK-YOU**
We would like to say a big thank you to Steve and Karen from Lions Club of Tweed Coast South who made a generous donation of $1500. More info »

Buy a TShirt and support ARRG
Buy one of these products with our logo and slogan and ARRG receive 20% of profits. More info »